The latest release of PnP Reusable property pane controls (1.8.0) adds an additional property (webAbsoluteUrl) that allows a target site to be specified for loading the lists.

While nowadays, the trend is to not use sub-sites – at the moment you can’t even create a modern SharePoint site as a sub-site, in the past, the sub-site approach was commonly adopted by organisations when planning the Information Architecture of SharePoint sites. Using this approach, it was common to see information stored at the root web level (on custom lists) being used on sub-sites.

If you have a project that follows one of the models described above, you were not able to use the PnP PropertyFieldListPicker control on your SharePoint Framework web parts to load data from a different site.

The PropertyFieldListPicker was initially built to load the lists of the current site by default, and it was not possible to specify a different target site.

The changes included on the 1.8.0 version introduce a new optional property (webAbsoluteUrl) that allow you to specify the web absolute url of the target site to load the lists from.

This can be as simple as: 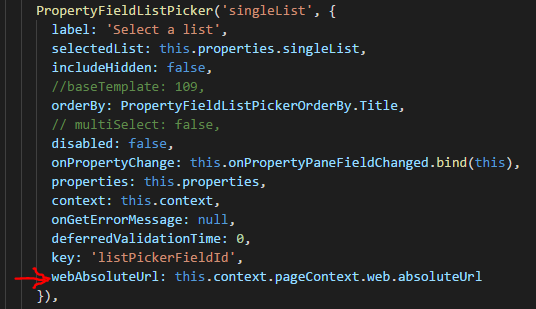 In this example we use the current web from the page context, which you really don’t need as that’s the default behavior, but you get the point.

One important thing to keep in mind is that you need to ensure that the users have permissions to access the list if the list is on a separate site/site collection.

I’m a big SharePoint and Microsoft 365 development enthusiast and I always try to share the things I learn. I try to be active on the SharePoint development community and stay up to date with the latest developments within that space. I’m also a SharePoint MVP in Office Development since September 2019.